Plastics machinery shipments drop, but up from 2021 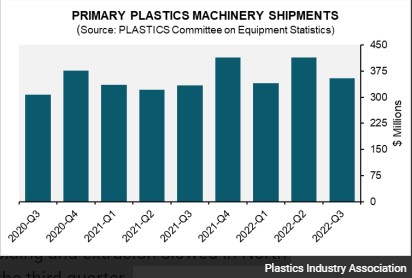 Shipments of primary plastics machinery for injection molding and extrusion slowed in North America in the third quarter.

The preliminary estimate of shipment value from reporting companies totaled $353.8 million in the third quarter of 2022, according to the Plastics Industry Association. This is a decrease of 14.4 percent from the previous quarter but an estimated increased of 6 percent from a year earlier.

"It can be argued that the slowdown in plastics machinery shipment in the third quarter is in sync with the cooling of the U.S. economy. However, compared to the quarterly shipments in 2021 — a stellar year for the plastics industry particularly for plastics equipment suppliers — this year's third-quarter shipments remain above the first three quarters' shipments last year," Perc Pineda, the association's chief economic officer, said in a news release.

Historically, there is a bump up in shipments in the fourth quarter, Pineda also said.

"Given supply chain issues due to the pandemic, which have stretched delivery lead time, it would not be surprising to see shipments in the fourth quarter to be above the third quarter," Pineda added.

"There is also a huge year-end push for businesses to get their manufacturing capacity in gear for the coming year. This should support stable demand for plastics equipment next year, albeit lower than this year because of moderating economic growth," he said.

The estimates come from the trade association's committee on equipment statistics, which also conducts a quarterly survey of plastics machinery suppliers about present market conditions and expectations for the future. The outlook of the survey participants hasn't changed significantly, particularly for the next 12 months.

"The outlook for the next 12 months virtually unchanged from the second suggests that plastics equipment suppliers have considered slower economic growth ahead and have not strategized accordingly for the 2023," Pineda said.

Mexico and Canada remained the top export markets of plastics machinery from the U.S. in the third quarter. The combined exports to USMCA partners totaled $109.7 million, which was 65.9 percent of total U.S. plastics machinery exports.