Resin prices in Europe trending up

Price report for the month of April 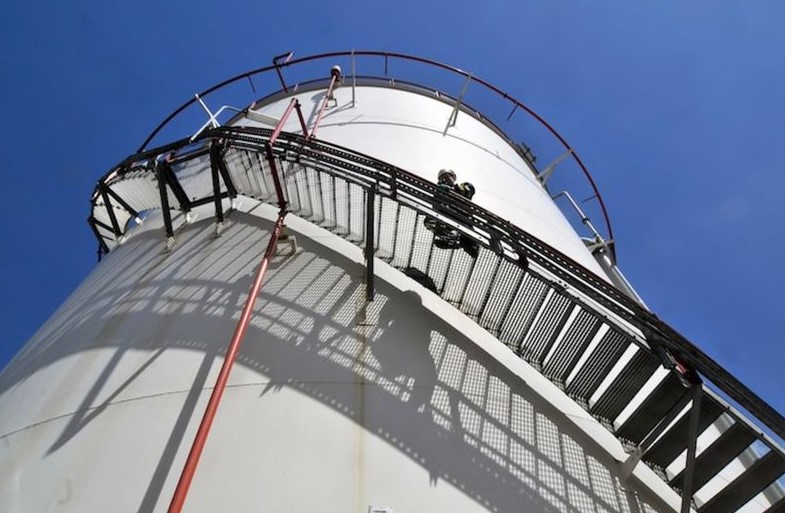 In April, European standard thermoplastic prices increased sharply yet again following significantly higher monomer cost settlements. Polyethylene settled in line with the higher cost of ethylene while polypropylene prices were raised by just less than the propylene cost settlement. Polystyrene and PVC price levels increased well above the rise in feedstock costs. Overall, supply is tight while demand has faltered with prices at such high levels.

Low density and linear LDPE prices increased by €200-250 per metric ton, which is in line with the €230/tonne rise in the cost of ethylene. PP prices just failed to match the €225/tonne increase in the propylene contract price following strong buyer resistance.

PS prices increased by more than the €360/tonne rise in the styrene monomer (SM) reference cost. SM production is highly energy intensive. The SM cost spike reflects the sharply rising cost of gas and concerns over its future availability.

PVC prices reached a new record high in April with a gain of €200/tonne, which is well in excess of the proportionate impact of higher ethylene costs on PVC production.

In April, material availability for PE, PVC, PS and PET remained limited, and, in some instances, customers were put on allocation. Styrene monomer supply has been impacted by the shutdown in Shell’s Moerdijk cracker in the Netherlands and production cutbacks at other cracker plants due to high energy costs. The PP sector was in better balance with most contracts fulfilled. Imports into Europe from Asia were generally lower for most polymer sectors in April as a result of logistics bottlenecks.

A selection of the latest production issues is summarized below;

- Naphthachimie shut down its cracker in Lavéra, France on 13th April following a leak in the supply of seawater for cooling. It is not clear how long the outage will last. The Lavéra cracker is a major supplier of VCM for four French PVC plants and also supports HDPE and PP production at thee site.

- Trinseo declared force majeure on its production in Terneuzen, the Netherlands, in early April as a result of technical issues Shell was reported to have shut down the cracker for ethylene, propylene and styrene in Moerdijk, the Netherlands on 23rd March  due to technical problems.

- Ineos shut down its paraxylene plant at Geel, Belgium for a one-month planned maintenance program on March 21.

Demand surprisingly held up well in April. There were however signs that concerns about a possible recession and the very high price levels is leading many converters to buy only the bare minimum volumes to meet current production needs. Some sectors are performing better than others, building and construction and household appliances continue to outperform, while ordering from the automotive sector is very low.

In May, crude oil, gas and polymer prices are most likely to rise further due to continued uncertainty caused by the war in Ukraine and tighter supply. Fears of an economic slowdown and the very high prices will likely however continue to weigh on converters’ ordering activity. 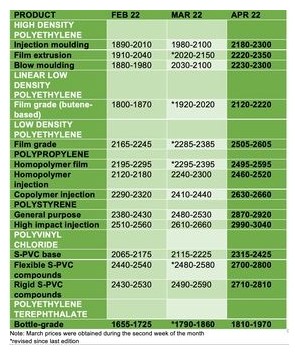 L/LDPE producers pushed through further exorbitant price increases in April due to higher feedstock and energy costs. Following the rise of €230/tonne in the ethylene contract price, L/LDPE producers called for price hikes of €250-300/tonne or even as high as €400/tonne, depending on suppliers’ production levels and the extent to which an energy surcharge was passed through in the previous month. By mid-April, deals were settling €200-250/tonne higher compared to March closing levels.

Production remains at normal levels and suppliers are able in most cases to fulfil contractual obligations. There are however reports of shortages for some specialty grades. Logistics bottlenecks have restricted imports from the Far East.

Uncertainty caused by the war in Ukraine coupled with very high prices has curbed demand. Some converters are considering an extended Easter break due to the high prices and uncertain outlook.

In April, HDPE producers called for a significant price hike of €300/tonne as a result of higher energy costs and an increase of €230/tonne in the ethylene contract price. However, producers were unable to fully realize their price target and had to settle for price increases of around €200/tonne for most standard grade material due to lower demand.

The very high price level has deterred many converters from ordering any more material than is absolutely necessary to fulfill immediate contracts.

Material availability is tight with a number of plants down due to either planned or unplanned maintenance programs. As the spring plant maintenance season is about to move into full swing, supply is likely to worsen over the next few months. The supply situation has been further shortened by a reduced flow of imported material into the region since March.

The propylene contract price increased by €225/tonne in April to a new record high of €1,675/tonne. PP producers responded by calling for a price hike of between €300-350/tonne to cover the higher feedstock and energy costs. The PP sector is also unnerved by the prospects for gas supply as a result of the Russia-Ukraine war. By mid-April, PP producers had only managed to secure price increases in line with the monomer cost rise due to lower demand.

Buyers baulked at the exorbitant prices being asked for at the start of the month and refused to negotiate. By mid-month, however, buying interest picked up as producers reluctantly backed down from their initial price stance.

On the supply side, there is sufficient material available to satisfy demand although the upcoming plant maintenance season is likely to tighten availability.

In April, PVC producers announced sizable planned price hikes ranging from €185/tonne to €250/tonne reflecting energy surcharges in addition to the cost pass-through of 50% from ethylene, which settled at €230/ton higher. Producers have stipulated that an energy surcharge must be implemented this month as the higher energy costs failed to be reflected in March pricing. By mid-month, base PVC resin prices were up around €200/tonne.

Regional PVC supply remains low as a result of several planned and unplanned plant outages. Imports from Asia are also down due to the production restrictions as a result of the zero COVID policy of the Chinese government.

The record price levels are denting demand. Converters are struggling to pass through the higher energy prices onto most of their customers and are buying additional material according to their immediate needs.

PS prices hit a new record level in April surpassing the previous high set in May 2021. Producers tabled planned price increases between €415-430/tonne. The bulk of the rise stemmed from a €360/tonne increase in the April styrene monomer reference price settlement and the rest from an energy surcharge. By mid-month, PS prices had increased by more than the feedstock cost rise.

Material availability has tightened as a result of production issues and a cutback in production. Trinseo declared force majeure on its styrene supplies from Terneuzen, in the Netherlands, and another regional producer was also reportedly facing production issues.

Demand has faltered this month due to the sky-high prices, the Easter holidays and the shorter working month. Many processors are having trouble passing through higher costs to end users and are cutting back on purchases.

Material availability is low as a result of maintenance turnarounds at plants in Southern Europe, where allocations are in place. Imports from the Fast East are also low as European buyers shunned Chinese imports due to the ongoing logistics backlogs and late shipment terms. Furthermore, there is a trucker shortage across the region as many Ukrainian drivers had to return to their country after the invasion.

The war in Ukraine is casting a shadow over normal expectations for a seasonal upturn in PET bottle demand. Converters are limiting their polymer purchases to a bare minimum and are having difficulty passing through cost increases to their customers.