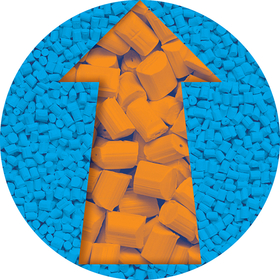 North American prices for PET bottle resin and polycarbonate increased in February, while the Ukraine crisis has kept upward pressure on commodity prices for March.

Regional PET prices took another big jump in February, climbing 8 cents per pound after surging 12 cents in January. As in January, the major February hike was caused by severe supply tightness and higher feedstock costs, as well as by freight and logistics challenges. PET prices were up 26 cents in 2021.

"There's been no improvement in the imported material supply and there are some continued issues in domestic production," one PET market watcher told Plastics News. He added the market could see 4 more cents in increases for March.

In PC, prices moved up an average of 9 cents per pound after climbing 25 cents in the second half of 2021. On a recent webinar, Amco Polymers engineering thermoplastics products director Jeff Schultz said that "inflation has been constant on engineering resins."

He added that ongoing shortages of glass fiber, flame retardants and other additives have continued to challenge plastics processors in 2022. Many of these materials are needed for compound and concentrate production.

Supply situations for many engineering resins — including PC — remain relatively tight, he added, although some are improving. PC suppliers also are looking for additives, while supplies of that resin could be affected by maintenance turnarounds this year.

The ongoing Ukraine crisis — which began when Russia invaded that nation on Feb. 24 — has caused tremendous volatility in global oil and gas markets, which have an impact on resin prices as well.

West Texas Intermediate oil prices were near $92 per barrel when the invasion began, but had surged to $124 by March 8. Since that point, prices had declined to less than $100 but had moved back to almost $103 in late trading March 17, a net increase of 12 percent since Feb. 24.

Markets for natural gas had seen similar volatility, beginning at $4.62 per million British thermal units, peaking at $5.02 on March 4, then dropping below $4.60 before climbing back to close at $4.75 on March 16, a net increase of 3 percent since Feb. 24.

All of this activity in energy and feedstock markets has kept upward pressure on several resins, increasing the likelihood that prices will rise in March. Polyethylene makers are working toward increases of 4 cents per pound that had been unsuccessful in prior months. Some PE suppliers have announced increase attempts of 5-6 cents for April as well,

In polypropylene, spot prices for polymer grade propylene monomer indicate that resin prices for March could be up anywhere from 8-15 cents per pound. Polystyrene makers are pushing a 5-cent hike for March as a result of pressure on styrene monomer and benzene feedstock.

Demand for most commodity resins has remained strong, as the U.S. economy has proved resilient in spite of higher inflation and gasoline prices.