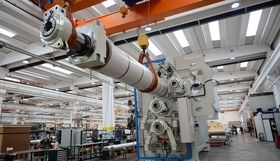 Milan, Italy — The full-year outlook for the Italian rubber and plastics machinery industry is ‘strongly positive’ but the continuing increase in raw materials prices and the recently added energy costs are set to impact demand, according to trade association Amaplast.

Revenue for the first nine months of the year increased 14 percent year-on-year, with a "particularly positive trend" observed in the domestic market, said Amaplast 10 Nov, citing the latest survey by the MECS statistical studies centre.

Amaplast said the “good performance” of the market in the first half of the year was consolidated by the results of the third quarter.

During the July-September period, it went on to say, revenue grew by 17 percent over the same period last year, and orders recorded “an even more encouraging” 30 percent increase.

According to the association, the higher third quarter sales were primarily driven by “the excellent tone of the domestic market,” particularly in the new machinery segment.

Exports, on the other hand, were driven primarily by replacement parts.

Amaplast said its expectations for the last quarter of the year remained “strongly positive”, with order portfolio set to record a 17 percent increase and revenues close to 60 percent growth year-over-year.

On the applications front, the association said that packaging and medical sectors showed the most positive trend while construction and automotive industries remained flat.

Despite the overall positive performance, Amaplast said increasing raw materials and components costs remained a concern and could impact the recovery in the industry.

“The escalation of raw materials and component prices — coupled with low availability and longer delivery times – [are] serious issues [and] have plagued logistics for over a year now, without any near-term resolution in sight,” said the association.

Meanwhile, it added, “the energy bill is beginning to weigh heavily on the books, threatening to make Italian production in the sector less competitive than that of foreign competitors.”