Some unexpected calm for most resin prices in September 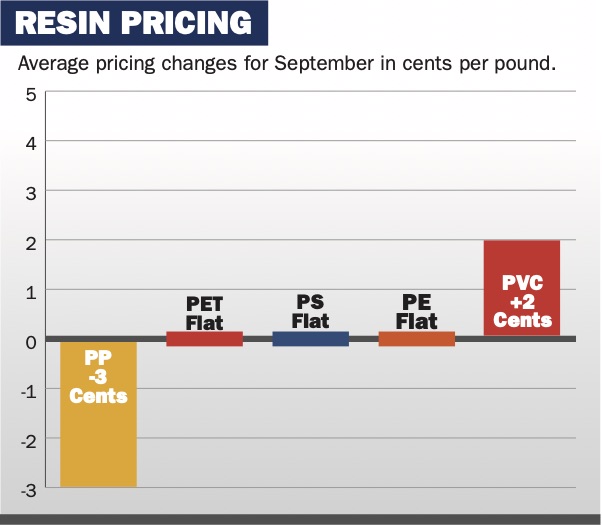 Suspension PVC prices moved up 2 cents in September after a similar hike in August. Prices for the material now have increased 26.5 cents so far in 2021 and a net of 42 cents since January 2020.

Some North American PVC makers had attempted to add a 5-cent increase mid-September after the Louisiana coast was hit by Hurricane Ida on Aug. 29. Major plants operated by Shintech Inc., Formosa Plastics Corp. USA and Westlake Chemical Corp. all were shut down for periods of time. A major Shintech PVC unit in Freeport, Texas, also was closed because of a lack of vinyl chloride monomer feedstock from supplier Olin Corp. But quick restarts of these plants helped boost supply and limited the September move to 2 cents.

Some suppliers now are seeking a 5-cent hike this month. PVC demand "is strong and supply is still really tight," an executive at a PVC maker said. "It will probably take all of October for us to dig out of the hole on inventory."

Through August, regional PVC demand was up 9 percent in film and sheet, 10 percent in rigid pipe and tubing, 12 percent in siding and related products, 24 percent in windows and doors and 35 percent in compounding, according to the American Chemistry Council.

PP prices for September dipped 3 cents per pound, matching a drop seen in prices for polymer-grade propylene monomer. Some PP makers tried to add 5 cents in margin improvement in September but were unable to. A similar margin move stalled in August, even as resin prices moved up 11 cents, again matching PGP.

Even with the September decline, PP prices are up a net of 76.5 cents since December. Some price erosion is possible through the end of 2021, according to Scott Newell, a market analyst with Resin Technology Inc. in Fort Worth, Texas.

"Supply has caught up, and the market is in a good spot," Newell said. "It seems like the market is recalibrating. … [PP] buyers are pulling back a bit."

Hurricane Ida shut down Pinnacle Polymers' PP plant in Garyville, La., but that plant has restarted. Propylene production had resumed at some affected locations as well.

Regional prices for polyethylene, PET and polystyrene resins all were flat in September — a rare event for 2021. PE prices were flat for the second consecutive month, with far less drama than August, when buyers battled back a 5-cent increase attempt for high density PE. A 5-cent move for September didn't gain much traction.

"We're catching up on inventory from the February [ice] storm," said RTI market analyst Mike Burns. "That put the market in the hole for 1 billion pounds, and it's taken until August to catch up."

Burns added that the regional PE market is getting back to its ability to export about 40 percent of its total output. Overall North American PE demand for 2021 looks to be roughly flat with the previous two years, he said.

In PET, prices were flat for the second consecutive month after rising 2 cents in July. Prices also had been flat in May and June. The overall lack of higher prices was somewhat surprising to some market watchers, since summer months bring stronger demand from the beverage market, which leads the PET field.

North American PET demand "is solid but is now seeing a little seasonality," according to RTI market analyst Mark Kallman. He added that the market has seen a large amount of imported material available to buyers during 2021.

PET prices are now up 14 cents so far in 2021. A resin plant operated by DAK Americas in Bay St. Louis, Miss., closed briefly as a result of Hurricane Ida, but that outage didn't affect market prices.

According to a recent report from the Beverage Marketing Corp. consulting firm, a higher price point and the popularity of larger reclosable plastic containers is continuing to drive the vending channel to convert from 12-ounce cans to 16-, 20- or 24-ounce PET bottles. Although these containers officially contain two or more servings (typically 8 ounces), many consumers see them as single serve and consume them as such, the report said.

The report added that hot-filled or pasteurized beverages like tea, fruit juice and beer, which once were limited to more heat-tolerant metal and glass packaging options or cold filling, continue to move into PET because of improvements in resin, container design and blowing techniques. These techniques have boosted PET's barrier properties and heat resistance. As a result, according to the report, new glass and metal-to-plastic conversions are occurring.

Regional polystyrene prices also were flat after increasing by 8 cents in August. Prices were unmoved as a 6 percent price drop for benzene feedstock — used to make styrene monomer — essentially negated supply tightness caused by the temporary hurricane-related shutdown of a major PS plant operated by TotalEnergies in Carville, La.

That 1.4 billion-pound-capacity unit represents about 25 percent of all U.S. PS capacity. Styrene plants in the area operated by Americas Styrenics and Cosmar Co. also were down but have restarted.

"The outages aren't 100 percent back, but they're mostly up and running," RTI market analyst Robin Chesshier said. "But [PS] demand has basically been flat, so there hasn't been a big pull on styrene."

Price hikes for natural gas, used in North America as a feedstock for PE and PVC, have been even more extreme because of storage and supply issues for that material. Rates began September at $4.38 per million British thermal units but soared 34 percent to $5.87 by the end of the month. From that point, prices already were up another 7.5 percent to $6.31 by Oct. 6.